This led to a draft of a parenting book entitled, “Treat your kids like dogs and they’ll grow up to be confident and caring pack members”. Thankfully, that never was published.

Starting in the late 1970s, Tron Jordheim became a sought after as a seminar leader, coach, and training adviser for competition dog clubs across the country. He was instrumental in opening a pipeline for importing top quality working dogs from Germany and Central Europe into the USA. In this photo you see Tron Jordheim leading the delegation from the United Schutzhund Clubs of America into the Stadium in Salzburg, Austria, as the Team Captain for the 1982 World Union of German Shepherd Dog Clubs European Working Dog Championship. He is the first guy you see on the right in the blue sweater. 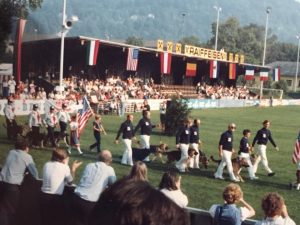 When the flip flop in international exchange rates took the profit out of his business of importing German Shepherd dogs, Tron went to work as a cold-call sales person for the Great Bear Bottled Water Company in New York City. They gave him the Upper West Side of Manhattan, which was the worst performing territory in New York.

It wasn’t long before it was one of the best performing territories and he was being sent out to work in other markets as a trainer and sales-blitz leader. Great Bear was eventually taken over by the Perrier Group and its Poland Spring Water division, which made known its intent to eliminate the sales force and fire all the Great Bear middle management people. It was one of those odd but frequent conversations when a boss sits down with a top sales rep and says “You are making too much money, so we are letting you go”.

That’s when Tron decided to move to Central Missouri where the commute is short and the prairie wind is bitter. Once in Missouri, Tron saw that a Culligan Bottled Water franchise was trying to make a business grow and went to work to help make that happen.

Tron helped grow the business from 1,200 customers to 6,800. It became the Culligan Bottled Water franchise with the highest per capita penetration of bottled water accounts of any in the 900 plus dealers in the Culligan network. It wasn’t long before Tron became a verb. After training and consulting for other bottled water companies and other Culligan dealers, sales people stopped going selling and started going “Troning” to get more customers. His booklet, “Setting Coolers” and his work in the field are two of the reasons many of you use water five gallons at a time.

And then along came an opportunity to grow the Self Storage business. Tron spent 15 years helping to grow one of the largest privately held self storage companies in North America, before moving on to work with his friends at Store Here and the RHW Capital Management Group. You can contact Tron for services and consulting relating to self storage at Self Storage Strategies.

His sessions on sales, marketing, people management, business development, and cultural competency are worth the travel. 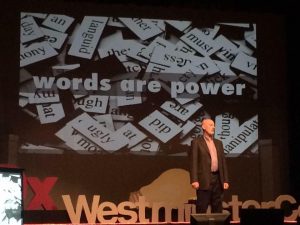 He can be contacted through the website for Jordheim Consulting.

These days, Tron consults for companies, works on self storage businesses, and has a few entrepreneurial projects going.